Is Running Bad for Your Knees?

The 51st AJC Peachtree Road Race might have been moved to November this year, but July in Atlanta will always be about running to me. The tradition of holding the world’s largest 10 kilometer race in the heat of the summer on the Fourth of July is a unique one—but runners have always been accused of being a unique breed. It is common for many runners to experience and run through minor injuries, so in some circles running has a reputation for being bad for joints. Even among healthcare professionals, team sports participants, and generally active individuals, running is often portrayed as self-injurious, and the myth is often repeated that running is bad for your knees.

So is running really bad for your knees? When people describe an activity as being “bad” for knees, they typically mean that the activity will cause joint degeneration called osteoarthritis (OA). Researchers have been investigating a possible link between running and knee OA for a long time. Individual studies have produced conflicting results. However, a systematic review and meta-analysis performed in 2017 examined pooled data from 17 studies and 114,829 participants, and the researchers found that recreational runners had lower rates of hip and knee OA than sedentary controls and elite, competitive runners. While the prevalence of hip and knee OA was 10.2% in the control (non-running) group and 13.3% in the elite running group, the prevalence of OA was only 3.5% in the recreational running group. Based on this data, elite competitive running (such as runners competing at Olympic and world championship levels) may lead to higher rates of knee OA, but sedentary lifestyles also lead to knee OA. On the other hand, recreational running actually appears to have a preventative effect on knee OA.

What if you have been told that you already have knee osteoarthritis? I regularly hear healthcare professionals recommend that individuals with knee OA stop running. Some are told they can never run again. However, these recommendations are not supported by recent evidence. A large 2018 observational study followed 1,203 participants with knee OA. Study participants were asked about their activity level, but were not discouraged from running or given specific instructions about how to run. Researchers tracked their symptoms and radiographs (x-rays) over 2 years to determine if running influenced the progression of OA. The study found, “Among individuals 50 years old and older with knee OA, self-selected running is associated with improved knee pain and not with worsening knee pain or radiographically defined structural progression. Therefore, self-selected running, which is likely influenced by knee symptoms and may result in lower intensity and shorter duration sessions of exercise, need not be discouraged in people with knee OA.” In other words, running does not make OA worse, and it’s associated with less knee pain even if people with OA have to modify how long or how hard they run.

So running at a recreational level, which is what most runners are doing, is actually good for knee health. Even among those who already have OA and degenerative changes in their knees, running is safe and does not worsen the condition. If you want to start running but find that current knee pain or general fitness is a barrier, a good physical therapist should be able to get you on the right track. Happy running!

Sleep Will Make You Stronger 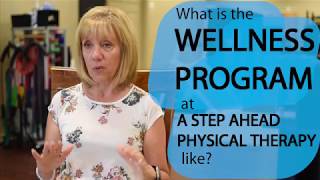 3 Most Common Springtime Injuries And How-To Prevent Them

Update: Masking Guidelines for A Step Ahead Physical Therapy

Managing the leading cause of disability in the United States

The Flowers Are Flourishing, Are You?